Open to: All, detailed results viewable to: All. Participants: 8

Your SO says "I need a little time." Do you consider this to mean they've broken up with you?

EDIT: I felt this needed a little more clarification.

It is a grid relationship. It is a monogamous relationship. You remain partnered. Your SO did not add "and I want to see other people."

I am having a poll on a question. First of all, let me set up the scenario.

You're in a grid relationship and have been partnered for a long time. You and your partner are dealing with disagreements and/or some issue or issues. Your partner says to you "I need some time" and you are fine with that. You do not get unpartnered during this time.

Does this mean, to you, that you are broken up?

It is clear from the answers that perspectives differ widely, and in most cases, certain expectations color the interpretation of the situation.

In some cases, more questions would be asked, in an effort to get things like: Quantity of time, is there an outside problem that can be assisted-with, can a definite date be set for when the "time apart" ends.

In some cases, people would assume that the general "agreement" of the relationship - monogamous or not - would hold and not change during this interim time, and they would expect not only that their partner would be faithful to that agreement, but would return after a time to decide together whether to continue the relationship, modify it, end it, etc.

In my case, we had "times apart" before. Sometimes it was because one or both of us needed rest. Other times, we had offline concerns or commitments. Yet other times, we wanted to spend time thinking, independent of the other, on a problem we were having and we used the time apart to let feelings cool and rational heads prevail.

This time, however, was different. I was still going on the same agreements and understandings as before, while my partner wanted to use the time to spend with others, up to and including intimacy, to decide if they wanted to continue our relationship.

What resulted was a lot of hurt, on both sides.

On my side, I felt cheated-upon because the partnership still existed, and I felt I had reasonable expectation of him to be faithful to it.

On his side, he wanted the freedom of "comparison", and THEN making a decision, but I did not realize that and he was not clear with me. He DID use the time for "comparison", and decided he did not wish to continue the relationship as-is. He wanted the freedom to have intimacy with others, while I remained as his "partner on paper" and kept my place in our roleplay scenario. Considering that I was hurt, offended, felt cheated-upon and dishonored, I asked for a divorce, and lots of very hurtful words have since flown back and forth.

Again, I come back to what I have said in another post on this blog, and a post on my personal blog: Communication is everything - ESPECIALLY if it is an online relationship.

So, we were both right, from our perspectives. Neither one was to blame, except for a definite lack of clear communication. The communication problem is not an easy one to resolve, because there are problems on his end with trust that I cannot resolve. He has to resolve them, himself.

Feel free to vote in the poll, and add your comments there, and/or discuss it here. There is an infinite realm of ideas and situations tied to online relationships that are only coming to light in, say, the last decade, primarily because of the advent of 3D virtual worlds.

This woman is FANTASTIC!

I took a couple of photos; you can see them here.

Here's just one of them: 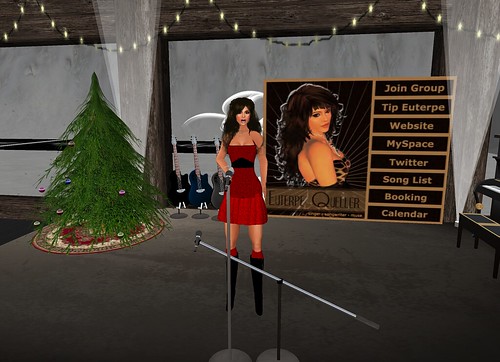